There are many different groups in Italy which study, take care and save sea turtles; all of them work with great passion for the conservation of these animals. They struggle against all the many threats caused by the human activity but unfortunately most of the time without the right facilities and supports.
Our group is one of them.

Hydrosphera was founded in 1994 and it’s involved in the conservation of the marine environment. It is a mixed group of biologists, naturalists, veterinaries and nature lovers.
This is our story…

Once upon a long ago…In the summer of 1988 two of us (who of us it’s another story…) decided to investigate on Linosa Island to find tracks of any loggerhead activities. This small remote island at the time was almost unknown but the local people knew very well that on that beach there were sea turtles activities. Unfortunately that summer there wasn’t any sign of loggerheads. But they didn’t give up and kept in mind that beach until the 1994 when they founded Hydrosphera and came back to Linosa Island again looking for loggerheads.

In 1994 the “Loggerhead sea turtle project” started, its main aim was to monitor the beach Pozzolana di Ponente on Linosa Island and to tag the sea turtles accidentally captured by fishing gear. We only had a small equipment, just what we need to spend the night… a tend near the beach small but strong enough to resist to the bad mistral, a dynamometer, a measuring tape, a clamp to tag and… luck! That season was amazing, astonished we saw the first loggerhead female nesting during the day and after that week we had more five depositions! In total the six nests on Linosa Island were the highest number in Italy.

In 1995, thanks to the Municipality of Linosa, which gave us the building, Hydrosphera opened the Marine Turtles Rescue Center. At the beginning there were only a small surgery to take care of the injured sea turtles, few tanks, a small exhibition with few sea turtles models made by clay and dioramas. In the meanwhile the monitoring of the beach continued and now Pozzolana di Ponente beach is well known as one of the three most important nesting sites of the loggerhead Caretta caretta in Italy.
In 1998 started the collaboration with the Conservation Nature Department of the CTS, which is an association involved also on sea turtles conservation. 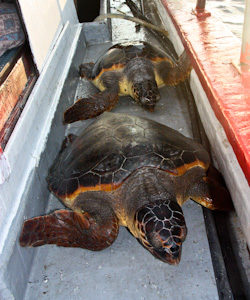 Between 1999 and 2006, thanks to two European projects (promoted by the CTS): LIFE99 NAT/IT/006271 e LIFE03 NAT/IT/000163, co-financed by the European Community and the Ministry of Environment and Protection of Land and Seaand together with other associations has been possible to improve the Rescue Center.
A new surgery room with new diagnostic instruments for the sea turtles care (a X-ray equipment, an anesthesia apparatus, a sterilizer for surgical instruments, centrifuges for blood analysis…) , new big tanks for a total of 5000liters with a possibility to hospitalize up to ten sea turtles, a new system of filtering and purifying of sea water and an outdoor pool of 15.000liters for the rehabilitation of sea turtles have been built up. Also the exhibition has been recently improved with more dioramas and more 1:1 scale models; such as a leatherback of two meters!
In all these years hundreds of sea turtles has been rescued and released into the sea, thousands of hatchlings were born on the beach of Linosa and more than 100.000people have visited our Rescue Center.

So after all these good results, thanks to our, still marked, enthusiasm and our improvements our story is not yet ended… to be continued…

On this website we use first or third-party tools that store small files (<i>cookie</i>) on your device. Cookies are normally used to allow the site to run properly (<i>technical cookies</i>), to generate navigation usage reports (<i>statistics cookies</i>) and to suitable advertise our services/products (<i>profiling cookies</i>). We can directly use technical cookies, but <u>you have the right to choose whether or not to enable statistical and profiling cookies</u>. <b>Enabling these cookies, you help us to offer you a better experience</b>.